Bluffing a Four-Flush River in the WPT Borgata Main Event 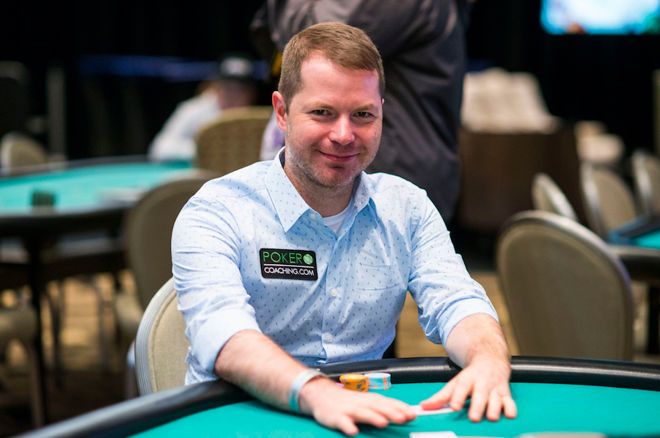 Here is another hand from the World Poker Tour Borgata Poker Open Championship I recently played. It presents an interesting, not uncommon river decision whether or not to bluff when there is four to a flush on the board.

This one comes from early on when the blinds were 200/400 (with a 400 big blind ante) and the stacks were deep. Action starts with an active player in the hijack seat raising to 900, and it folds to me in the big blind where I’ve been dealt

I’m basically always calling here, only three-betting those rare instances when I think my opponent could fold.

, I checked, and my opponent bet 1,100 (just under half-pot). I could call or check-raise with my gutshot, backdoor flush draw, and two overcards. This time I just called, making the pot 4,600. The turn then brought the

I was prepared to fold to a bet, but the hijack checked as well. The river then brought the

, putting a fourth heart on the board.

As the headline suggests, thinking both about how my hand had no real showdown value and that my betting could cause my opponent to fold out some better hands, here I saw an opportunity to bluff.

I’ll let you see what bet size I settled on and how things played out, and to hear my analysis of the situation and decision — and, afterwards, some additional thoughts about how my opponent played the hand.

With a four-flush river, do you try to bluff in this spot or do you give up the pot?

Jonathan Little is a professional poker player and author with over $7,000,000 in live tournament earnings. He writes a weekly educational blog and hosts a podcast at JonathanLittlePoker.com. Sign up to learn poker from Jonathan for free at PokerCoaching.com. You can follow him on Twitter @JonathanLittle.

NBA players tired of the talk, ready to walk
39 mins ago

NBA players tired of the talk, ready to walk
39 mins ago