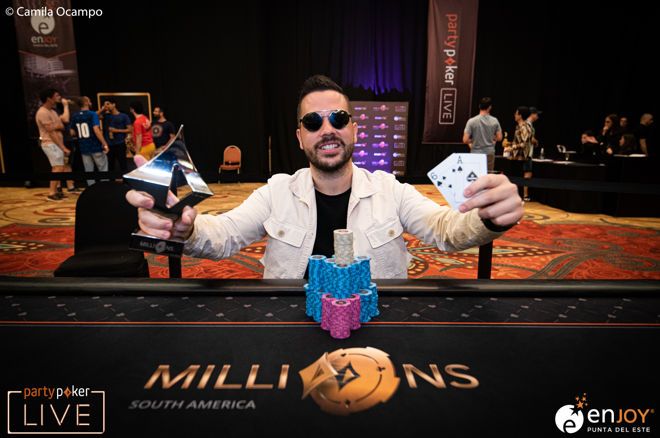 After a couple of six-figure scores Down Under, Jattin added another at partypoker MILLIONS South America with a win in the $10,300 High Roller. Jattin conquered a field of 84 entries for a $200,000 first-place prize.

That win comes after he chopped the A$25,000 Challenge at Aussie Millions last month for $680,000, which he followed by winning an Australia Poker Open event for about $200,000.

Just 12 players would make the money, and after the bubble burst, a short-stacked Kevin MacPhee would bubble the official final table with a ninth-place finish.

Jattin’s aggressive nature earned him a huge pot when he doubled through Mike Del Vecchio at the final table. Del Vecchio put in a three-bet in the small blind and called a cold four-bet from Jattin. On a

flop, Jattin bet tiny and then called when Del Vecchio check-shoved with

. Jattin had the aces and they held on the turn and river to move him to almost 30 million, while Del Vecchio soon hit the rail in sixth, following Jack Sinclair, who lost a flip with ace-king against jacks.

Another regular making the final table was Marvin Rettenmaier, who got unlucky when he woke up with ace-king and couldn’t hold against the

of Seiji blind versus blind.

What looked like it could be a long battle turned into a short one. It’s not apparent from the live updates what exactly happened, but it seems Seiji lost a monster pot to be crippled down to 3.4 million. While he managed two doubles, he’d get his short stack in with queen-two and lose to ace-six all in preflop.

Reshiram, Zekrom and Kyurem coming to five-star raids
6 hours ago

Reshiram, Zekrom and Kyurem coming to five-star raids
6 hours ago