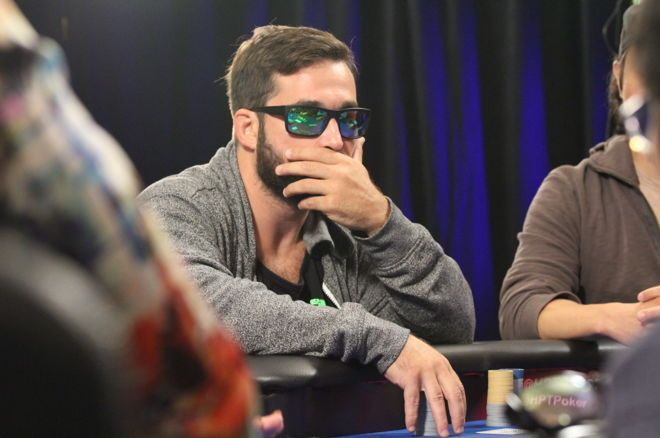 Covering live poker tournaments for a living affords me the opportunity to see countless thousands of hands played out, many of which offer interesting and potentially valuable insights into how players — both amateurs and professionals — play the game. In this ongoing series, I’ll highlight hands I’ve seen at the tournaments I’ve covered and see if we can glean anything useful from them.

I recently got a chance to dust off my playing chops for the first time in a few months as I traveled to Milwaukee for World Series of Poker Circuit Potawatomi. There, I participated in a handful of tournaments, including the $1,700 Main Event, which is where I saw this hand take place.

A player on my right had been playing a very tight strategy overall, and when he did play, he often just shoved all in preflop. While he had nursed a short stack for awhile, he’d recently found a triple up when he got pocket queens in three ways and nailed a queen on the turn after a player with

From middle position, Eddie Blumenthal (pcitured) opened for 1,600. The player on my right jammed from the cutoff for about 35,000. Action folded back to Blumenthal, who agonized for a few minutes.

Finally, he did opt to call, turning over

. The other player also held

and they chopped the pot.

When we went on break a bit later, Blumenthal confided that he wasn’t sure about his call and he actually felt like it was likely a losing call. I considered that it was likely close, and thought I’d take a look at the math to see whether his post-mortem was correct.

That’s a big price, and indicative of how you have to play against this sort of massive overbet shove.

So, what sort of range can we expect the player in the cutoff to have in this spot? If he’s shoving queens, we can expect he’d likely shove aces and kings as well. Most players are aware that ace-king is a good shoving hand too, but some very tight players may not shove with it. We’ll give him ace-king suited to factor in that there’s some chance he’s shoving these also.

What about jacks? Clearly, Blumenthal was on the fence about whether his opponent would shove with jacks since he second-guessed himself afterward. We’ll the calculation both ways.

If you run these ranges into an equity calculator against a pair of queens, here’s out it works out:

Either way, if these estimates are correct, Blumenthal was right. He made a bad call if his opponent is shoving this tight. Throw

in and it becomes a call as the queen edge north of 50% equity.

I certainly count myself surprised here as I’d have thought with jacks in the range, queens would at least be very close, but it’s actually a clear fold. Basically, if someone is shoving a very tight range for this many blinds, you need kings or better to call.

Even if you include every combo of ace-king along with queens or better, the queens still only have just north of 40% equity, making them a fold. Jacks-plus and all ace-king combos pushes the queens just over 47%, making them barely a profitable call.

Sometimes, in low-stakes environments, you’ll run into newer players who aren’t confident enough to play postflop and actually do approach poker like this player in the cutoff. They’ll occasionally peel a few hands with preflop calls while mostly playing a very aggressive shoving strategy when they have the goods.

Bottom line is, against someone playing this way, stick to raising their blinds as often as you can and folding to most of their shoves. Only call when you have one of the absolute best hands possible, because if their ranges are this tight, jacks aren’t cutting it and queens are on the border.