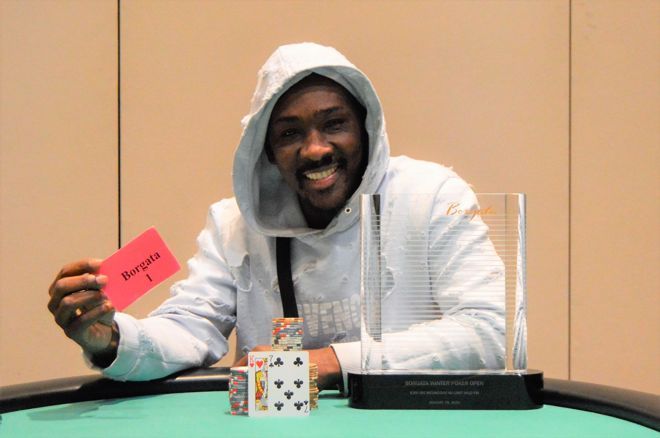 It was a long night of tournament poker that extended into the early morning hours and with the clock about to strike 8:00 a.m. the newest BWPO Champion was finally crowned.

“He was a really good player, a tough player and also a very polite kid, I enjoyed playing against him,” Gaspard said as he posed for his winner’s photo.

Event #21 $230 Deepstack NLH drew a total of 247 entries creating a prize pool of over $47,000 and when the smoke cleared Peter Zarriello was the last man standing.

It was a long night of tournament poker that wrapped up in the Event Center in the late-night hours.

Zarriello entered heads-up play against Benjamin Datsko with more than a 2-1 chip deficit but managed to double up early in the match and he never looked back.

“I was pretty card dead for much of the day, but I was on fire at the final table, I won this one for Kobe,” Zarriello said as he posed for his winner’s photo.

Event #24: $440 Black Chip Bounty drew a total of 158 entries creating a prize pool of over $45,000. When the dust settled in the Event Center Vladimir Vasilyev was the last man standing.

Vasilyev entered heads-up play against Chen Xu at a nearly 3-1 chip deficit and the players battled into the late-night hours. Vasilyev battled back and in the end his

improved to two pair against the

of Xu to earn him the victory.

Vasilyev took home $13,560 and his first Borgata Poker Open title and he has now earned over $200,000 throughout his career.

Final Six Make a Deal to Close Out 2020 BWPO

In the final event of the 2020 Borgata Winter Poker Open – Event #25: $300 Deepest Stack NLH – the final six players began discussing an adjusted payout deal in the late-night hours. The stacks were counted down and it didn’t take long for a deal to be struck.

Daniel Gordon took first place for the lion’s share of the prize pool earning $17,838. Gordon and Ryan Dodd were the top two stacks and they agreed to run one hand for the trophy.

Dodd came out on top earning his second Borgata Poker Open trophy and $17,431 for his runner-up finish.