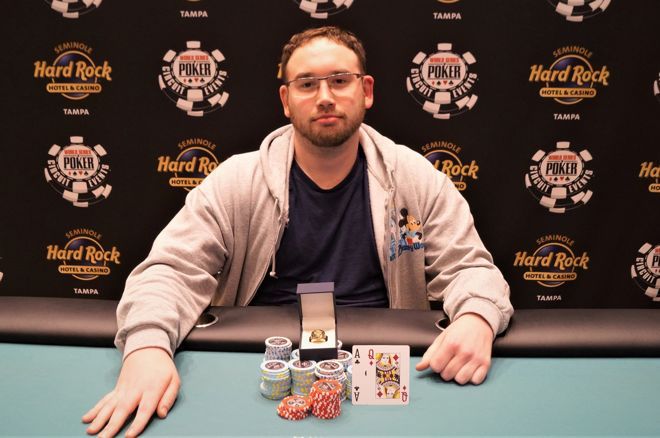 On Friday night, the World Series of Poker (WSOP) crowned its latest champion at the Seminole Hard Rock Hotel & Casino in Event #9: $3,250 High Roller 8-Max as Mark Zullo emerged the victor after besting a 104-entry field to secure his first piece of WSOP jewelry. Zullo took down the star-studded event for $89,150, bringing his career earnings to just under the half a million mark.

It was not the Seville, Ohio native’s biggest career-cash but it was, however, his first live tournament win. “It feels great. I’ve been playing a long time and I’ve never won a live tournament so that’s pretty cool.”

“It feels great. I’ve been playing a long time and I’ve never won a live tournament so that’s pretty cool.”

When Zullo was asked about the biggest hand of the tournament it was clear what his response was going to be.

“The kings-versus-aces hand, that was pretty big and after that, I just kind of had a lot of the chips,” said Zullo as he spoke of the hand in which he cracked the aces of Gary Lucci to take a monstrous chip lead of the final six.

Everything was on autopilot for Zullo after that hand until heads-up play as he leveraged his chip stack around nicely, applying pressure to the shorter stacks. The only hiccup en route to his victory was during the battle with his final competitor, Brock Wilson.

“He kind of crushed me heads up but I got lucky at the end. It feels good to stay in it, not lose your composure, keep playing and fight back.”

The final day began with 51 runners of the 104 total entries and it was not a long venture for the runners to get into the money. A total of just five levels were played before that number dwindled down to just 17 players with the top 16 finding a min-cash. Unfortunately for John Dollinger, he was the final player to leave without money after Stephen Song shoved the cutoff with eight-three and Dollinger obliged with his ace-seven. A window seven looked promising for Dollinger but when the flop spread, two threes fell behind that hockey stick. Song filled up on the turn and Dollinger dipped out as the bubble boy.

The final two tables were set and Song was leading the way. Action quickly picked up with multiple eliminations in the first few hands and it was not long before the final ten battled it out for a shot at the final table. Arkadiy Tsinis was left short after losing a race with Gary Lucci and decided to put his remaining stack into the middle with six-five against the ace rag of Lucci. The flop rolled out clean and the unofficial final table was set with Faraz Jaka on top.

Jaka started the eliminations off by sending the start of the day chip leader Jamey Kramer out in ninth place. Kramer jammed over the top of a Jaka raise with ten-nine of clubs and Jaka called with his ace-ten of spades. Kramer flopped a nine and turned a flush draw to block but the red ace on the river was his demise, sending him out early in the final table.

David Prociak saw his once rich stack fall in shambles and moved his depleted count into the middle with jack-seven. Jake Schwartz called with a pair of nickels and the two had a flip on their hands. The dealer spread out a not so exciting flop for Prociak as a third five landed on the board and the rest is history as Prociak was eliminated in eighth.

The pivotal part of the final table for Zullo was when Lucci five-bet shoved his 900,000 stack into the middle with a pair of aces and Zullo snapped with his kings. “I folded a king,” said Jaka but it made little difference as lady luck decided to sway in the favor of Zullo, placing a cowboy in the window. The runout failed to bring a bullet and the Canadian was sent to the payout desk in seventh place.

Schwartz decided to come back for part two of the pocket five chronicles, opening to 50,000 with a pair and two players jammed their entire stacks into the middle. Song and Anthony Askey both put their tournament lives at risk and Schwartz obliged. Song tabled ace-ten and Askey a pair of jacks but neither could subdue the inevitable five on the turn, sending both to the rail with Askey taking the higher payout as he had more chips to start the hand.

The tables swung back on Schwartz and he found himself in a place of need, jamming his stack into the middle as he searched for a double with his ace-jack of spaces and Zullo called, tabling king-queen of spades. The flop came down king-high and Zullo took the lead. A clean runout sent the pot to Zullo and Schwartz was eliminated in fourth place for a respectable $26,338.

Three-handed play lasted just under a full level before someone took an exit. Zullo limped the small blind and Jaka raised it up from the big, Zullo shoved and Jaka snapped for his remaining stack with ace-jack but was in rough shape when Zullo tabled ace-king. The board ran out ace-high but Zullo’s kicker took down the pot, sending Jaka to the payout desk as just two remained.

Wilson was on the short end of the stick from about six-handed down until the final three and when heads-up play started he found himself in that same spot but kept his composure throughout it all. Wilson fought back, drawing first blood with three jacks to even the playing field and from that point on he took over.

Wilson had Zullo all but out with two pair on a turned board but Zullo found an unlikely straight on the river to double and shift the momentum back into his corner, a shift too big for Wilson to overcome. Zullo ended up putting the final dagger into the coffin with ace-queen versus the king-ten of Wilson, turning a boat to take down the hand, sending Wilson out in second for $55,099.