Nuaimi out to make move from virtual gaming to boxing count 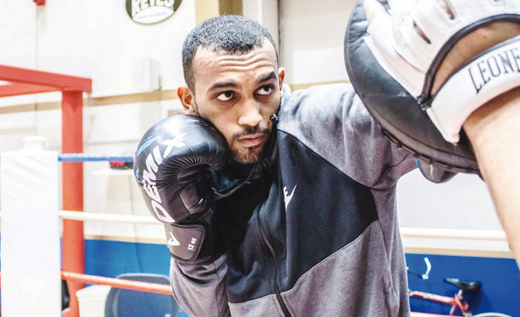 Fantasy will become a reality for super-flyweight prospect Sultan Al Nuaimi when he makes his long-awaited professional debut on the huge #RotundaRumble2 card on Friday at Caesars Bluewaters Palace in Dubai.

Al Nuaimi is a two-time national UAE champion who will be pitted against unbeaten Indonesian Charles Latuperissa on the stacked #MTKFightNight promoted by D4G Promotions in association with Round 10 Boxing Club and MTK Global.

The 26-year-old pride of Ajman is aiming for a successful start to his pro career since he started taking the sport seriously three years ago after spending most of his time playing video games.

Al Nuaimi said: “A friend of mine tried to drag me out of my video gaming world to get me to do something real, he made me try boxing and I fell in love with it.

“I kept on training and started to watch Floyd Mayweather and Prince Naseem Hamed’s highlights then decided to train harder to be able to compete.

“I’m very excited. It’s an amazing opportunity to start my boxing career on an amazing boxing event like Rotunda Rumble 2. I’ll do my best to win in style in all my fights and to show people that UAE is entering the boxing world strongly.

“I want to have great fights and make it to the top. I want to bring world titles to UAE and keep them here in the future.”

Also featured on the blockbuster bill that has representatives from 15 different countries.

World-ranked Jack Catterall is ready to show everybody why he’s deservedly on the verge of a world title shot when he headlines the massive #RotundaRumble2 card on Friday.

Katie Price takes her horse for a ride as she enjoys relaxed Easter weekend with Harvey
14 hours ago
Gambling Online Reviews 2019
18+
© Copyright 2019 GamblingOnlineGurus.com | All rights reserved