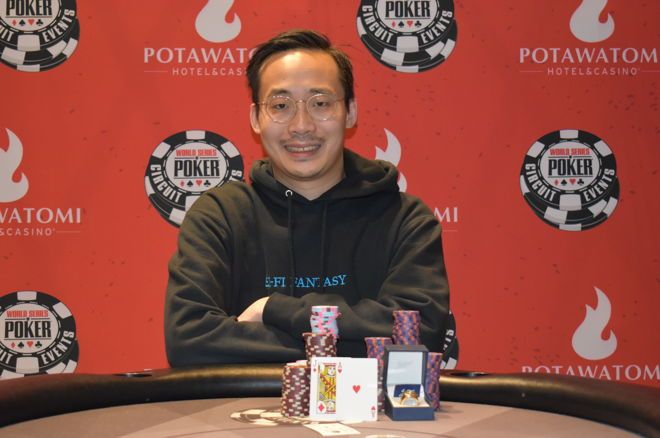 The 2020 World Series of Poker Potawatomi $1,700 Main Event began with 524 entrants, and on Monday it was 35-year-old Philip Shing, who was visiting Milwaukee for the first time, coming out on top to capture the $151,284 first-place prize, a gold ring, and a seat into the 2020 Global Casino Championship.

It actually marked the second ring for Shing, who revealed that he only plays poker a couple of times a year. Back in 2015, he won the WSOP Circuit Foxwoods Event #3: $580 Six-Max NLH for $14,543 and his first gold ring.

“Honestly it hasn’t really kicked yet but I think it feels really good,” Shing stated after his win. “I only play three events a year due to work but I actually had a month off of work so I came here.”

He added: “The casino was great, the people were amazing and I just had a blast here at the final table so I will definitely be making this trip again … As you can expect I’m exhausted at this point and I’m ready to go home and see my kids.”

The first final table casualty was the result of a classic flip when Marcus Yofon failed to get there with ace-king suited against Shing’s pocket eights.

Not long after, Mike Hartzheim bowed out in seventh after flopping top pair with a flush draw. He got it in on the turn against Cero Zuccarello, who was ahead with aces up. The ace of diamonds on the river gave Hartzheim his flush, but it was no good as it also filled up Zuccarello.

Chris Roth took his leave after jamming with nine-seven only to run into Zuccarello’s kings, and then the latter followed him out the door after running into kings himself after John Gallaher had limped with them from the small blind.

James Pupillo, who back in September finished fourth in the same tournament, got unlucky losing with ace-jack to the ace-eight of Shing all in preflop after an eight spike on the turn. That resulted in back-to-back fourth-place finishes for Pupillo, this one good for $51,484.

After Gallaher was dispatched in third place – the result of losing with queen-jack to Shing’s ace-jack – it took just one hand of heads-up play to crown a winner. Ken Donarski was at a 6:1 chip disadvantage and three-bet jammed with jack-eight. Shing called with ace-jack and held to nab by far the biggest score of his career.

The WSOP Circuit Potawatomi Casino Championship race was a tight one. Donarski had the early lead only to see Brett Reichard pass him up. Then, Vishal Patel took down the last two events on the schedule to win back-to-back rings and take the lead. Reichard’s elimination from the Main Event meant he was out of the running, but Donarski remained.

He needed to finish third or better to claim the title, so by finishing in second place he locked up the stop’s second seat into the 2020 Global Casino Championship. It was the cherry on top of an excellent series for Donarski, who finished fifth in Event #1: $400 NLH for $5,409 and then won Event #5: $400 NLH for $13,127 and his second gold ring.

The World Series of Poker Circuit continues this week at Hard Rock Tampa. The PokerNews Live Reporting Team will be on-site later this week to offer live updates from both high rollers as well as that stop’s $1,700 Main Event.

Be sure to complete your PokerNews experience by checking out an overview of our mobile and tablet apps here. Stay on top of the poker world from your phone with our mobile iOS and Android app, or fire up our iPad app on your tablet. You can also update your own chip counts from poker tournaments around the world with MyStack on both Android and iOS.