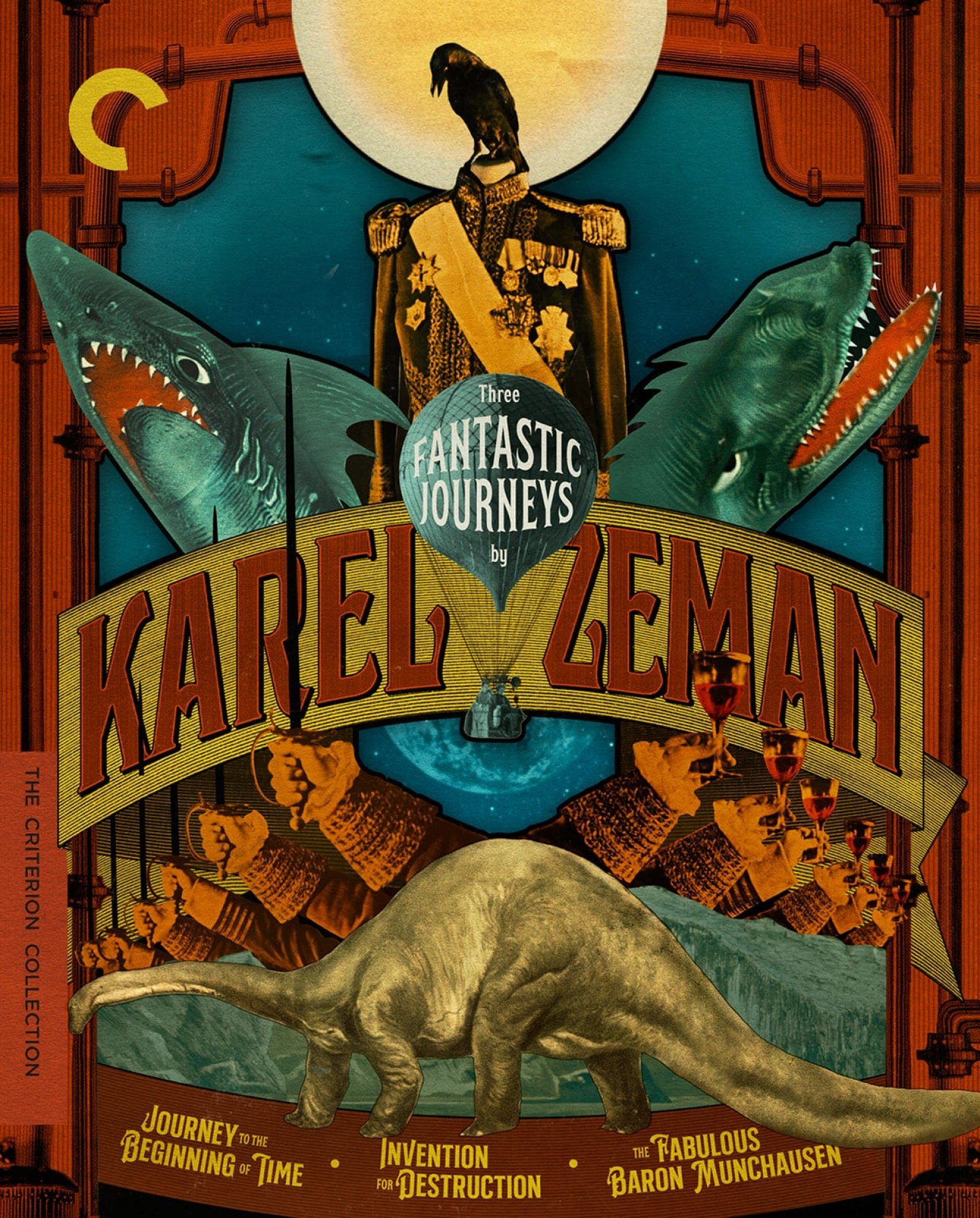 Czech filmmaker Karel Zeman is likely an unknown quantity even to movie buffs who are familiar with his venerated contemporaries, among them Miloš Forman, Věra Chytilová, Ivan Passer, and Jiří Menzel. But Criterion’s release of three of his features looks to close this particular knowledge gap. First chronologically in Three Fantastic Journeys by Karel Zeman is his 1955 debut feature, Journey to the Beginning of Time, the story of four brave, outdoors-y boys who travel backward, by rowboat, in geologic time. The film is tailored to young and adolescent viewers—the sort who’d project themselves onto the story’s characters—and the tone is implacably genial and anodyne, as Zeman’s screenplay (co-written with J.A. Novotný) neatly avoids anything that’s too complicated or too dark. About the worst thing the lads see, apart from a few mild scares, is some bloodletting from a battle between a Stegosaurus and a T. rex.

These fundamentals aside, Journey to the Beginning of Time is mostly a proving ground for a Karel Zeman that was just dipping his toes into effects-driven spectacle. Driven by a certain earnest, Boy’s Life magazine energy, the film is a diorama of wall-to-wall stop-motion and miniature effects, pitched as half dramatic adventure, half edutainment. You can rate the film as pure pablum—cut-rate, imitation Ray Harryhausen with dingy cinematography—but there’s some value in how it serves as a harbinger for what Zeman would do once he got in a groove.

Behind the vague title of the second film in the set, 1958’s Invention for Destruction, lies Zeman’s fearless embrace of a humongous arsenal of artificial strategies, usually coordinating two or three different modes of artifice in the same shot. The leap forward in confidence from Journey to the Beginning of Time to this is transformative, as if Zeman was born again. The film’s plot, which Zeman admits in the opening titles as having been lifted (but not, strictly speaking, adapted) from the imagination of Jules Verne, concerns a corrupt European nobleman who uses a stolen submarine to carry out clandestine raids on the high seas.

What figures prominently in this film, what most powerfully evokes Verne’s fictional ethos, is an aesthetic that covets intricate, early Industrial Age machinery in a manner that would be, in our contemporary discourse, tagged as steampunk. Well before we’d even heard of that appellation, we would see this nostalgia-for-the-past’s-futurism in other places, like in Blake Edwards’s 1965 film The Great Race. But it’s clear that Zeman’s other influence on Invention for Destruction—perhaps not expressed but certainly implied—is Georges Méliès. It may be the most striped film in all of cinema; when Zeman cannot find a practical way to superimpose onto a shot a translucent layer that suggests ridged artist’s paper, he will fill the frame with a limitless variety of costumes, props, and sets riddled with horizontal and vertical lines. If the letter of the film is Verne, then its spirit, expressed through a world made of elaborate, two-dimensional panels that play games with visual perspectives, must be Méliès.

It isn’t only via the illusion of rising out of an artist or architect’s sketchpad that Zeman affirms the film’s uncanny storybook-ness. Over and over, Invention for Destruction provokes viewers to doubt their own eyes as they reflexively parse components of a shot into what is and isn’t smoke and mirrors. Zeman’s audacious foregrounding of his own attempts at subterfuge is consistently bracing. Sometimes your eyes will catch that the actor whose shoulder you’ve been looking over is a phony, a set of two-dimensional panels, hinged together and cleverly painted. Or a shot will loiter a deliberate extra half second or so on an obviously stuttery arrangement of mechanized miniatures before cutting to a closer (and graphically matched) shot of the “real” actors, who, nevertheless, still inhabit a Michel Gondry-esque construction of matte shots and meticulously illustrated, yet wafer-thin, props.

There are many such examples, each of a different configuration of fakery. Viewers familiar with Wes Anderson’s films will correctly, and with a deafening snap of retrospective clarity, mark Zeman as one of the Isle of Dogs director’s foundational influences. On a surface level, Anderson, like Zeman, is prone to pushing a reality-stretching composition all the way to its limit at key moments. A good illustration of a Zeman-esque shot in Moonrise Kingdom is Captain Sharp’s rescue of the film’s young lovers from certain death, hanging onto them from a nearly destroyed church steeple—the moment depicted by miniature silhouettes against a dollhouse void. These types of shots, which Anderson deploys conservatively, and usually only during climactic peaks, occur once every few minutes in Invention for Destruction.

But Zeman also exerts over many grim, violent plot developments in Invention for Destruction an almost deadpan calm that turns out to be just the right tone to govern an adventure film that’s crammed with intricate bric-à-brac and heady with pulpy melodrama. In one exemplary moment, the submarine-borne pirates ram an apparently peaceful surface ship, and the latter begins to plunge into drowning waves, at which point a woman serenely fetches her caged bird and sets it free. Wes Anderson devotees will recognize not only the vivid earnestness of this grace note—he excels in etching these lyrical moments-out-of-time—but the overarching, decisive tendency toward tranquility as a counterintuitive strategy. Likewise, when the story turns in Invention for Destruction portend excitement and violence, Zeman’s characters can hardly be bothered to raise their voices above a drawing-room deadpan.

Serenity and poise in the face of wonderments continues into 1962’s The Fabulous Baron Munchausen. Here as well is a wide range of elegantly mounted styles, though Zeman seems reluctant to flaunt the cracks in the artifice. If the seams holding Invention for Destruction together always appear on the verge of bursting, it’s because Zeman packed it that way, and what’s often marvelous about the film is the ways in which it creaks elegantly with the strain. Such a thrilling zeal is mostly missing from The Fabulous Baron Munchausen, thanks to any number of cinematic innovations and enhancements that would have cropped up in the interim, enabling a filmmaker to erase features and bugs in a single swipe. But in losing a certain fearlessness in the face of risk and logistical adversity, the film gains in opulence.

Zeman’s knack for nimbly deploying sophisticated and effects-heavy decoupage testifies to an altogether scaled-up self-assurance and resourcefulness. Four years between pictures might have made him value seamlessness over sleight of hand, but his carnival spirit has doubled, not halved. There’s also a strangeness about The Fabulous Baron Munchausen that’s balanced on Zeman’s delightfully unexplained flourishes, like billowing red smoke that hangs across an extended chase scene following an early palace raid. It symbolizes spilled blood, then bloody anger, then, finally, momentum only, an accent pointing to itself. The film answers equally to Zeman’s animated and live-action components, diminishing neither—an unusual parity.

The Fabulous Baron Munchausen showcases Zeman as a chimeric virtuoso in full force. With it, he mastered a symphony of trick effects, a lyrical play of perspectival lines and sophisticated textures. Perhaps most astonishingly, he made a film that looks and feels like it’s severed from 1962 entirely, and belongs, instead, both to silent adventure films and illustrated storybooks. Beyond even these things, the film (and Invention for Destruction, nearly to the same degree) is profoundly weird, its multiplicity of seagoing, airborne, and war-making contraptions powered not by combustion but by the singular, motive force of one mind’s eye.

Each of the three films has a different color palette, posing different challenges for video production. Journey to the Beginning of Time is the only one that looks poorly (the film, not the transfer), with dull, slightly brown-ish color cinematography. Invention for Destruction boasts crisp black and white in a kaleidoscopic array of patterns, and The Fabulous Baron Munchausen is rendered, for the most part, entirely in multi-planar, tinted frames, suggesting the look and texture of a meticulously revitalized silent picture, the kind whose making allowed for extremely rudimentary, early-days experiments in color processing.

As one would expect, all three films are virtually blemish-free, with color correction that appears to be perfectly judged, all the more impressive given the different learning curves between the three. An added pleasure is in the way Criterion’s mindfulness of Zeman’s increasing filmmaking savvy yields pleasure in spotting where the seams show in one project, only to vanish in the subsequent ones. The steady acquisition of self-assurance and knowhow, rendered through Criterion’s meticulous fidelity, tells a compelling tale on its own.

On the evidence, Zeman tended to direct his actors’ line readings toward wry solemnity, their most fearsome trials a slight inconvenience. What we experience are voice tracks, notwithstanding Journey to the Beginning of Time (which bears few such idiosyncrasies), governed by that same continental chill. The music will sometimes match the ambling quiet, and at other times takes flight with different crescendos owing to fanfare, genuflecting to heavens seen and unseen. Criterion’s audio team delivers impeccable results on a tall order: a rigorous management of a deceptively wide register, one that allows for an evocative interplay between the bass-heavy frontality of the dubbed vocal tracks and the slightly higher, dreamlike rear guard of sound effects and score.

You might go into this set without knowing Zeman from a hole in the ground, but a fleet of extras, spread over the three discs, will set you right. A handful of documentaries feature advocates of the cinema wizard, like animator Kōji Yamamura, director Tim Burton, and artist Ludmila Zeman (the director’s daughter), filling in biographical details and arguing persuasively for the wondrous potential of pre-CGI special effects, which few of Zeman’s contemporaries were capable of. Because the set only includes his first three theatrical features, large parts of Zeman’s life before them, and after, are filled in by these extras. Of all the documentaries and videos, long and short, the 101-minute Film Adventurer Karel Zeman is the most exhaustive; interspersed with histories and talking heads, we see a class of Czech film students laboring to reproduce a couple of Zeman’s seemingly simple effects shots, and, in the process, coming to understand just how much the maestro was able to achieve without the benefit of CGI, digital-oriented post-production, or hard-drive storage.

On the disc for Invention for Destruction, there’s an alternate opening scene for the English-language market, but the prize here is a quartet of Zeman’s early short films (A Christmas Dream, A Horseshoe for Luck, Inspiration, and King Lavra), foretelling what his talents would bring in subsequent efforts. Finally, the delightful packaging opens to reveal storybook-style pop-ups, inspired by each of the three films, and a fine essay by critic Michael Atkinson.

Criterion’s three-disc tribute to the deliriously imaginative Czech auteur is going to resound with a deafening click as a missing piece behind many, later cinematic visionaries falls neatly into place. You’re going to wonder where Karel Zeman has been all your film buff life.

We’re committed to keeping our content free and accessible—meaning no paywalls or subscription fees—so if you like what we do, please consider becoming a SLANT patron: