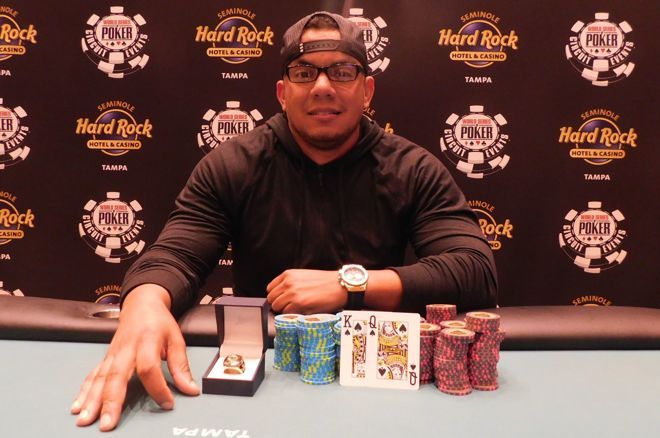 The World Series of Poker (WSOP) Tampa $2,200 High Roller reached its conclusion on Thursday and at the end of the day, the winner of the Circuit Ring and the $88,717 first-place prize was Tampa local Romeo Mendoza.

Primarily a cash game player, Mendoza is well known on the local Tampa and Florida poker scene, and the circuit ring was his first big splash in tournament poker.

“We are always going to remember this because we are buddies.”

“This means a lot. Especially cause I won it here in my hometown. I have been playing at this casino since it opened,” said Mendoza after the win.

Mendoza also talked about how cool it was for him to play against fellow Tampa local Andrew Kelsall heads up.

“I have been playing with AJ [Kelsall] for 15 years. It’s pretty cool that two Tampa guys are here. It was really cool that it was me and him. We are always going to remember this because we are buddies.”

He added: “I kinda know how he plays. I felt really good playing against him heads up”.

Route to the Ring

Mendoza started the day high up on the leaderboard fifth in chips. He quickly ran it up further and remained among the leaders for much of the day. When play got down to two tables, Mendoza began to sink just a bit but recovered to enter the final table third in chips.

He mostly stayed out of huge pots during the final table and played his way down until heads up, where he was significantly behind Kelsall in chips. Kelsall, a big Philadelphia Eagles fan, had taken the final table by storm and largely run over the table up until that point.

The heads-up battle had one key swing point. Mendoza was all in and at risk on the turn after calling Kelsall’s shove. Mendoza had pocket aces but they were second best to the two pair – queens and sixes – of Kelsall. The ace of hearts on the river sent a survival bolt into Mendoza and propelled him to the win by winning a preflop flip with king-queen.

Action of the Day

The day began with 49 survivors from Day 1. As play started, 19 other players took advantage of the late registration and created a starting day field of 68. That took the total amount of entries up to 173.

The eliminations went steadily all the way until the money bubble when Corey Thompson became the bubble boy to bring the field down to 26 cashing players. Several high-profile circuit players were cut down en route to the final table, including an extreme breakneck elimination pace at one point that saw the field reduced from 22 to 14 in a mere 20 minutes.

At the final table, the first few victims were taken out early, including Hamid Izadi, who was eliminated in eighth place. William Medina Diaz went out in seventh to bring the table to six-handed play where it would remain for an hour and a half, with many small pots being traded.

Eventually, the six-handed duct was broken when Miguel Hernandez was eliminated in sixth. James Calderaro was cut down in fifth after having a large stack at one point. Play would slow down again with four players left for an hour before the next elimination when Steven Veneziano hit the rail in fourth place.

Eric Salazar became the third-place finisher not long after to set up the aforementioned heads-up battle between Kelsall and Mendoza.

NBA players tired of the talk, ready to walk
52 mins ago

NBA players tired of the talk, ready to walk
52 mins ago