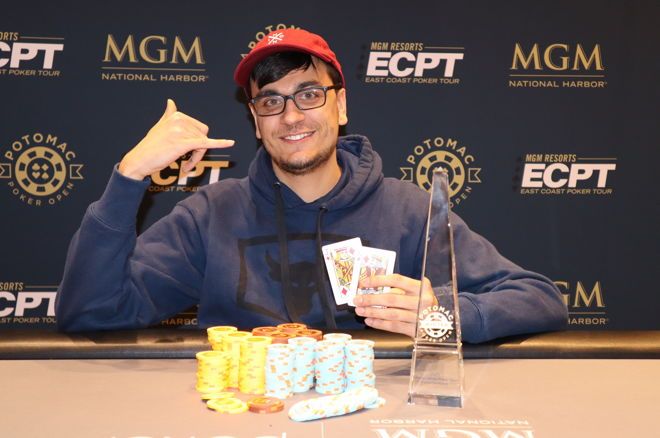 After almost eight hours of play, the final day of the $400 Large Stack of the 2020 Potomac Winter Poker Open, which featured a $100,000 guaranteed prize pool, came to an end with Sachin Joshi taking down the tournament for $25,005 by defeating Massoud “Steve” Nooralian heads-up in the 261-strong field.

This cash is his second-largest ever after coming third in an event in England a few months back and it will take hem well over the $100,000-mark according to the database on The Hendon Mob. The Londoner is in the United States for a month to visit family in Virginia and decided to play this tournament which ended up being a profitable decision.

He scooped the Day 1b chip lead and even though he got short at one point, he remained patient, waited for his spots, got lucky sometimes, and ended up walking away with all the bragging rights at a final table that included some familiar regional faces including Chris Zelesnick, who also reached the final table of the Opening Event last Sunday finishing in fifth place.

Start of the Day

When the final 19 players returned to the tables in the MGM Grand Ballroom at noon local time at the MGM National Harbor, it was Ben Strumpf who would become the first victim of Joshi when he ran his kings into Joshi’s ace-five and an ace came on the flop. John Kim, Dien Le, and Vincent Marchesano were next to go before an hour of double-ups came flying in.

Andrew Whetzel then came out best in a three-way all-in situation in which William Lawson was sent to the rail with Dong Jun Ji following him a few minutes later. Stephan Waters, Jeromy Bittan, and Ryan McPherson all busted before the tournament went down to one table.

Ken Fishback was the first player to leave the final table with king-queen. Barbara Rogers held the same hand when she was eliminated while Ali Salah-Eddine busted with king-jack. An hour later, Kevin Ryan first doubled up but then lost them all to Joshi in a blind-versus-blind situation. Joel Doney was the one to double Ryan up and then lost the remainder of his stack to Nooralian and Joshi when they chopped the pot.

Whetzel then left the final table stage in fifth place when his flopped top pair and kicker lost to the turned two pair of Zelesnick. Soon after Charles Coddington was kicked out by Nooralian when his gutshot to a straight didn’t get there. The three remaining players played for another 20 minutes before it was time for a break and some deal discussions which didn’t go anywhere.

It would take almost two hours of three-handed play in which Joshi was the short stack for most of the time until he first doubled up with ace-seven and cracked Nooralian’s aces and then caught him in what might be the most remarkable hand of the tournament. Joshi raised on the button and Nooralian defended his big blind. The ace-deuce-five flop got Joshi to check-raise the continuation-bet of Nooralian. who responded with a shove, which was snap-called. Nooralian held nine-seven for the backdoor-gutshot-straight-draw while Joshi had the flush draw and got there on the turn to claim over 60 percent of all the chips in play.

But it was Zelesnick who was eliminated in third place when he three-bet shoved on a nine-six-trey flop with a pair of tens. Joshi called with queen-nine and found another nine on the turn to get to heads-up. Soon, it was all over when Nooralian shoved his last nine big blinds in with queen-trey suited and was looked up with by the king-jack of Joshi. Joshi flopped top pair, Nooralian turned second pair but got no help on the river.

This is it for this tournament but PokerNews will be back at 11 a.m. on Friday, February 14 for Day 1a of the $3,000 Main Event which has a $500,000 guaranteed prize pool so make sure to return for all the action from the floor.