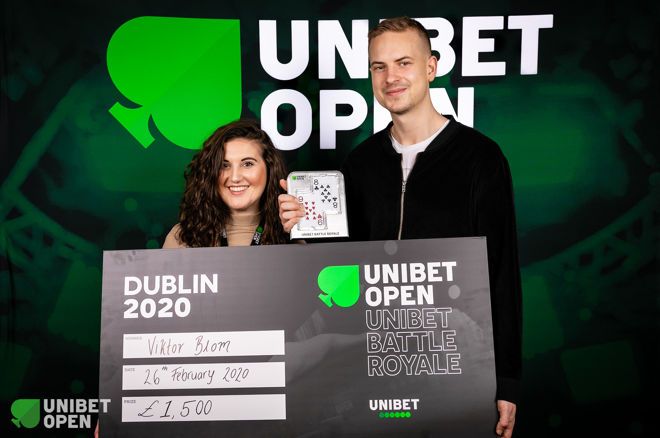 The 2020 Unibet Open Dublin in the Bonnington Hotel in Ireland’s capital is in full swing, and PokerNews is right there on the floor to capture all the action. While the Main Event is just underway, several side events have already wrapped up and crowned their champions.

One of them was a showcase Sit ‘n Go between Unibet’s ambassadors, the Battle Royale, where none other than Swedish poker phenom Viktor “Isildur1” Blom walked away a winner. Blom, a staple at previous iterations of the long-running mid-stakes tour in Europe, defeated Unibet commentator David Vanderheyden heads-up, while Norwegian ambassador Espen Uhlen Jorstad settled for bronze.

Co-hosts of Unibet’s award-winning podcast The Chip Race, Dara O’Kearney and David Lappin, just missed out on the money, with O’Kearney bubbling at the hands of Jorstad after a long stretch of four-handed play. By then, the tournament had escalated in a very short-stacked affair, with not even 30 big blinds in play left between Blom, Vanderheyden, and Jorstad.

With the latter two on crumbs, “Isildur1” then took them out in back-to-back hands to add another poker trophy to his mantlepiece.

The 2020 Unibet Open Dublin €2,200 High Roller saw Ireland’s Tarek Qunber keep the trophy on home soil after striking a three-way deal with Scottish star Niall Farrell and Robbie Toan. Qunber took €11,170 after chopping it up three-ways, while Farrell and Toan each became €10,000 richer. UK’s Max Silver was the only other play to cash in the event.

The first of three starting days drew 83 entries to the Bonnington Hotel, with 24 players advancing to Day 2 after ten levels of 60 minutes each. Mark Muldoon bagged the overall chip lead with 246,000, while the aforementioned Max Silver jumped straight in after finishing fourth in the High Roller to end up in second place. Irish poker legend Andy Black (143,000) and Unibet ambassador Espen Uhlen Jorstad (77,500) also advanced.

On Friday, Day 1b will kick off at 12 p.m. local time and feature ten levels of sixty minutes as well. Those who busted on Day 1a or Day 1b have a second attempt in the turbo Day 1c that kicks off at 9 p.m.